Editor’s note: The names in this story have been altered to protect the subject’s identity. 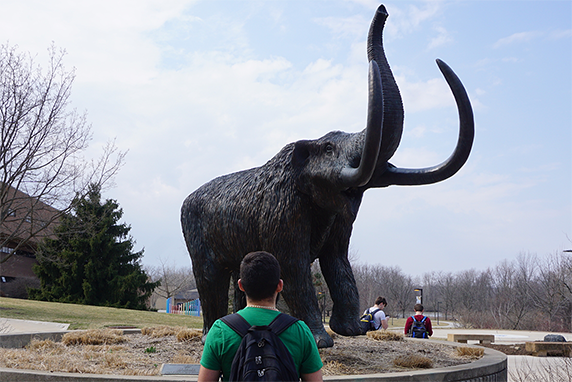 “Imagine living the past 18 years in fear of whatever you do wrong you get kicked out of your own home,” he said.

For the many children who are not officially documented citizens in the United States, this is a very real fear. Despite not holding American citizenship, immigrant children often live like average Americans. They go to school, they spend time with their friends, and they eventually get jobs. Yet for these immigrant children, the persistent fear that anything they do wrong, no matter how inconsequential, could result in the deportation of them and their families, is an always looming concern. This is the reality that Esteban, 22, has lived with for more than 18 years.

On the surface, Esteban’s life seems to be that of a normal American.

“I really enjoy watching shows on Netflix like Daredevil, and playing NBA 2K games on my PS4 when I have some free time,” Esteban said. “I also try to keep a healthy fitness routine by going to the gym and doing some weight lifting several times a week.” Since 2015, Esteban has been pursuing a Bachelor of Science degree in Computer Science at Purdue University Fort Wayne. “I was immediately drawn to programming because I saw it as using digital Lego blocks. I was into Legos at a young age so it was very appealing to me,” Esteban said. Currently, Esteban is an intern at Lenovo Software, applying and expanding his programming education as a member of their build and install team. None of this however, is indicative of the daily burden he carries regarding his citizenship status.

Born in South America, Esteban has been living in the United States with his family since they immigrated to the U.S. in 2001. “I do have some memories of living in South America, but living here is the only life I have a real memory of,” Esteban stated. “I remember feeling confused at the time. I wasn’t sure exactly what was going on at first.”

Although it was only his second visit to the U.S., Esteban and his family would not return to South America. At that time Esteban would have fallen under the proposed DREAM Act, which according to the American Immigration Council meant that as a young immigrant he would have eventually been eligible for citizenship through a three-step process. This however is no longer relevant to Esteban’s circumstance since he now has a U visa.

Ever since moving to the United States, Esteban and his parents have been making efforts to become official citizens. However, in early 2013, Esteban’s journey to citizenship took a dramatic, although unfortunate turn. Esteban’s mother was victim to a robbery and stabbing. His mother’s injuries required her to undergo many extensive surgeries and the effects of the attack have stayed with her ever since. As a result of the attack, Esteban’s mother became eligible for a green card, per a section of U.S. immigration law. According to the U.S. Citizenship and Immigration Services, U.S. immigration law allows non-citizens who have been victims of certain crimes to get a Green Card. Esteban and his parents are now residing under a U visa which allows them to apply for residency.

During Esteban’s junior year of high school, his family met lawyers who offered their services at no cost to him and his family, eventually getting them official work visas. They are currently in the process of applying for residency; a process that requires many documents and much patience. For this process, the government needs proof of residency, passports, pay stubs, tax records, school records, medical certificates/ examinations and any other identifying documents the applicants may have. Presently, Esteban is in the process of getting his Documento Nacional de Identidad, or DNI, which is a national identity document for citizens from South America. After getting his DNI, Esteban then must go to Chicago to renew his passport. Once that is complete, Esteban and his parents present their documents to their lawyers, who then continue the process by presenting the documents to the immigration center.

“After that it’s pretty much just a waiting game,” Esteban said. His citizenship status is still working against him. “I was taught that life is always going to kick you in the butt, especially since you’re from another country, but you have to make the best of the worst situation.”

In spite of the difficult process, Esteban says he wouldn’t change anything since his efforts are worth the reward. “I’ll be one step closer to living a normal life.”

A normal life like that of his younger brother Theo, 17, who is an American citizen by birth. Theo thinks very highly of his older brother.

“Esteban is a great guy. He likes to help people a lot and lends a hand when it’s needed. He’s a happy guy in general with an overall positive outlook and a family first mentality,” Theo said.

Theo, currently in his junior year of high school, looks to Esteban for wisdom and guidance. “Esteban is my biggest role model in life. He is very relatable because he’s gone through the same things that I am going through. He would drop everything and help me out if I needed it.”

One of Esteban’s close friends, Scott, 22, related how Esteban inspires him. “He inspires me to do better in life because he has it harder in life and has lived in fear of being deported. I admire his willpower. He pushes through a lot to get to what he wants to do,” Scott said. “Esteban is also extremely reliable and I like that in a friend. I enjoy his humor, wit, athleticism and he is just an all-around good guy.”

Although Esteban and his parents are in the process of applying for residency, their non-legal status remains a lingering concern. Fortunately for Esteban, his U visa allows him to continue to legally work in the United States. Ultimately, Esteban is not someone who is defined by his citizenship status. His brother Theo certainly agrees.

“I don’t think it will slow him down in any way. Esteban is determined. He is a hard worker in general and since he isn’t a natural citizen it makes him more determined to succeed. I feel that it may be a driving force behind his success.”