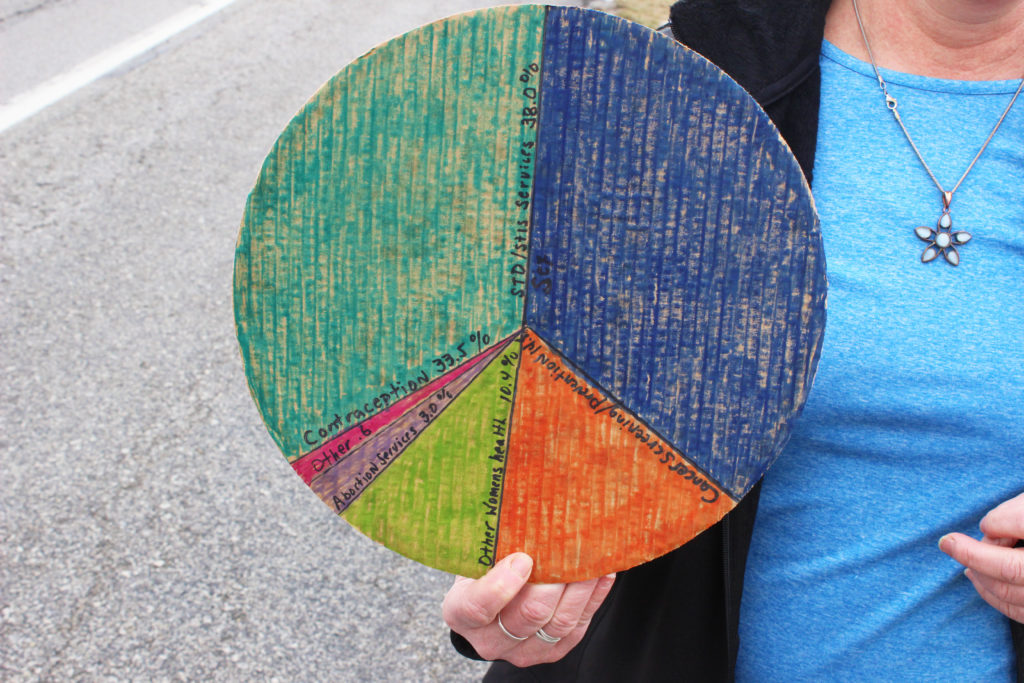 Planned Parenthood has been providing a range of health services to men and women for 100 years.

The opposition also hits home. Abigail Lorenzen is the operationsand media director for Allen County Right to Life, which coordinates the 40 Days for Life campaign in Fort Wayne.

The campaign has three pillars: prayer, presence, and community awareness. Lorenzen said the presence aspect requires participants to be present and pray in front of an abortion clinic.

She said there is at least one person praying at an abortion clinic every day during the campaign and that their presence raises awareness about the issues behind abortion.

IPFW senior Sylvia Rusk, a communication and political science major from Fort Wayne, has used these other services offered at Fort Wayne’s Planned Parenthood. Rusk said she went to Planned Parenthood to get contraception after her general practitioner refused to provide her birth control based on their religious beliefs.

Rusk said she had a positive experience at Planned Parenthood, as they were informative and explained the process to her.

IPFW senior Nicole Sanders is an English and women’s studies major from Fort Wayne and is the treasurer for IPFW Generation Action, formerly IPFW Voices of Choice. They are a Planned Parenthood affiliated group that is working to educate students about reproductive health.

IPFW Generation Action hosts events such as “condoms and candy,” where they hand out contraceptives and informational pamphlets about services that Planned Parenthood provides.

Nicole said she advocates for Planned Parenthood because she had a negative experience at her family doctor after getting a pap smear when she was only 16.

“I wish I had had information about Planned Parenthood,” Sanders said. “If I was able to go there, they would have been more gentle, more understanding, and they would not have put me through a physical examination that I was not ready for.”

November is usually a time to reflect on what you’re thankful for – the opportunity to have a quality education, for one, combined with two of the top universities in the state.

However, for some students at IPFW that was taken from them, by defunding liberal arts and humanities courses.

On Nov. 2 and 3 of 2016, students and faculty gathered in protest of the USAP recommendations, following the announcement of a split between Indiana and Purdue. Certain programs, such as women’s studies and philosophy, would be cut.

These reforms are in correlation with those across the nation. Universities in New York andIllinois have made cuts to humanities courses in recent years, while Gov. Matt Bevin of Kentucky was quoted by Inside Higher Education in September saying, “Public universities should consider cutting programs that don’t graduate students who are able to fill high-paying and in-demand jobs.”

According to some professors on campus, that is exactly what the university did following the USAP report.

“The focus here is on employability directly after graduation,” said Charlene Elsby, director of the philosophy program. “There is a long standing history of which kind of knowledge is more valuable and the professional degrees versus the liberal arts degrees.”

Elsby came to IPFW after finishing her Ph.D. in Canada back in 2014. She was on the tenure track here before the academic cuts took place. She was told tenured and tenure-track professors would not be affected.

“If I can determine excellence in teaching, research and service then I should be able to get tenure,” Elsby said. “However, I have received some communications to the effect that I should not expect for that to happen.”

Sophia Ulmer, professor of English and women’s studies, has only been at IPFW since the spring semester of 2017. She immediately saw the impacts of realignment.

“Of course I teach in women’s studies, so obviously people were very unhappy,” Ulmer said.

Ulmer said she feels extremely proud to work alongside Dr. Badia, who took a pay cut in order to keep the department running. But she’s less proud of working at IPFW, saying that after the decisions made last fall she is not impressed by the university.

“The first women’s study programs were in the early ‘70s and IPFW followed shortly after that,” Ulmer said. “It was special, it was cool, and I just wish that it was in a culture that valued women and the study of us.”

While women’s studies was able to resurrect itself with the sacrifices made by Professor Badia, the philosophy department was not so lucky.

Elsby said the faculty got a notice that some programs were on the chopping block in May of 2016. When the USAP report came out, there was a list of programs up for restructure.

Both professors Elsby and Ulmer are concerned about more cuts being made. Elsby pointed out the university can justify cuts when they see it appropriate and hopes they learned their lesson the last time.

“Hopefully, they will not only realize that these cuts were not well thought out,” Elsby said, “but that if they continue on this path it will continue not to be well received by our students and the general public.”

Women’s studies professor Ulmer said, that if the cuts keep happening it will begin to tarnish the reputation the school has built by offering Indiana University and Purdue University degrees.

Another thing that has Ulmer agitated is the $80,000 spent on the company Simpson Scarborough, who works with higher education institutions from its base in Alexandria, Virginia, that the university had brought in to help with the rebranding process.

Ulmer said she is grateful for the knowledge the liberal arts and humanities courses provided her with when she was earning her degree. Yet, she understands the other side of the topic.

A change to the campus that might affect the future of the philosophy department lies in the hands of the new Chancellor, as Elsby has high hopes for reinstating the philosophy program.

“What is a university without a philosophy program, like literally everyone who works here has a Ph. D. which stands for doctor in philosophy,” Elsby said. “It seems kind of contradictory to say that we do not teach philosophy here.”

Click here to read the read the multimedia trend.

Being First and the Honors Center are collaborating to offer a potential new scholarship, exclusively for honors students who are the first in their families to attend a four-year college.

The director of the IPFW Honors Center, Farah Combs, announced the possibility for the new scholarship at her talk “Are You Honors Program Material?” on Sept 21 in Walb Student Union.

Combs said the application for the first-generation scholarship will hopefully be available soon, following more discussions with HPC members to finalize the decision. Once students are accepted into the honors program, they must complete three credits in an honors or H-option course to apply for scholarships, which can reach $1,000, Combs said.

Aside from scholarship opportunities, Combs said benefits to joining the honors program include early registration for freshmen and sophomores, access to the Honors Center, and making students more marketable after graduation.

Despite these benefits, Julie Creek, director of the Office of Diversity and Multicultural Affairs, said Being First events about the Honors Center have significantly lower attendance than their other workshops. She said the first time they did the workshop over a year ago, nobody showed up.

“I think a lot of what we are dealing with is that whole impostor syndrome thing that first-gen students frequently deal with,” Creek said. “They can’t conceive of themselves as possibly being honors students, so, you know, why would I bother to go to something that doesn’t apply to me?”

Combs said she thought the talk went well but wished more students came. She said the Honors Center definitely needs to reach out to first-generation students more to make them aware of what the university can offer them.

Many first-generation students who attended the event said they would have considered joining the honors program if they had known more about it sooner. Thaigo Amaral, a junior mechanical engineering major from Piracicaba, Brazil, was one of them.

“If I knew all this information from the beginning I could have considered joining, but now I’m a junior so it’s too late probably,” Amaral said.

Creek said Being First will have to figure out better ways to get people to show up to these workshops. She said she considered having outdoor programs where people walking by can just join in.

“I think the feeling sometimes is that if I walk in that door they’ve got my soul and we don’t,” Creek said. “I mean, we don’t want anyone’s soul. We just want to help them get through school and have the absolute best experience possible. But they ultimately have to be the ones that step up and say, ‘Yes, I want to do this.’”

Being First will hold more workshops throughout the semester on topics such as the library, Facebook, studying abroad and impostor syndrome. Dates for these events can be found on the IPFW website.