It’s a nice house. Bright yellow. Well-kept yard. It’s on a busy road–so every time you drive by it you think how many wrecks might happen on it. Inside, the smell of cooking chicken fills the air. Even though you just ate, you find yourself growing hungry. You don’t necessarily notice how clean the house is, but rather how un-dirty it is.

Around the corner, in the dining room is a woman. She’s in her 50s. She’s Hispanic. She’s drinking coffee. Doing paperwork. On her screen she cycles through blueprints. A gas station. A hospital. A school. She’s bidding work.

Then it all comes together: the clean house, the blueprints, the bidding––she is the owner of Bixler Interiors, a final construction cleaning company. She calls out to her son to check the dinner in the oven before making her daily phone calls.

When a construction company like Weigand or LBC builds a high rise or a hospital or anything else, they make a mess. They are primarily concerned with constructing the building and moving on, so they leave their mess when they’re done. Someone has to clean that. Someone has to make sure the windows are spotless and that the bathrooms are shiny. That someone is Deb Bixler, owner of Bixler Interiors. 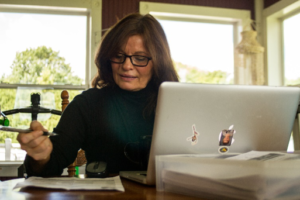 Bixler Interiors has been a steady company for the last ten years. Now, Bixler is working toward establishing herself as a minority woman in business. The Indiana Laborers Union Partnership is responsible for doling out these achievements by carefully selecting those that accurately fit the requirements. Bixler currently has her WBE, or Women’s Business Enterprise.

This year, she also won the 2018 Influential Women Owned Business Award for the State of Indiana, according to the Local 81 Laborer’s Union. Bixler said she is happy about winning the award, but it doesn’t change her outlook.

“I work hard and I’m honest with people. I feel work should just be that easy. Everything in between is just someone making it harder than it has to be,” she said when asked how she tries influence people in her field.

As Bixler further detailed her work life, it became very apparent that this positive attitude is a common theme.

The origin of Bixler interiors is an ever-evolving path of choices. Bixler’s first management position was at a Johnson Junction gas station in Decatur, IN. She then moved on to running an Angela Bridges Fitness center before eventually opening her own fitness center for six years. After closing the fitness center, she got a job at GMS construction as a “runner,” or “gofer,” as they called it.

“But I called it a go-for-it-girl,” Bixler said with a big laugh. She then moved on to start her own cleaning company, but there was another pit-stop before then.

Her mother opened a furniture company and had Deb manage it. Like most things Bixler is a part of, the furniture business evolved into something greater.

“We decided to start picking up our own furniture, so we decided to get out own semi. From there we ended up owning—within five years—a fleet of semis,” Bixler said.

Bixler’s mother then opened her own trucking company. Deb worked dispatch and accounted for payroll. Eventually, Bixler had something of a falling out with her mother, forcing her out of a job. She had nothing. She had no way to provide for her family. She was lost. Until she started Bixler Interiors. While she had dabbled in cleaning once or twice for side money in the past, her first big job was Vera Bradley. At 205,000 square feet, Bixler ambitiously bid the job and won. She said she didn’t have time to doubt herself.

“I was too excited. Cleaning big jobs is no different than the small ones, just more time consuming,” Bixler said. “You take it one room at a time and eventually, you’ll be done.”

Bixler didn’t do it alone, though. She enlisted the help of her family. Her children Jordan, James and Sayge worked for her. Since then, the business has always been a family owned company. While Vera Bradley was a big job to start with, that didn’t stop Bixler from chasing bigger and better things. She went on to win jobs like the Ash building downtown or the recently finished Parkview Cancer Center.

“We all appreciate and love each other,” Sayge said. “So it’s not stressful.”

Bixler said her life has been a busy one. She has met a lot of people and done a lot of things, but her biggest priority has always been being a mother and grandmother. She homeschooled her two youngest children and has worked with them at Bixler Interiors for the last ten years. Now that her two youngest children are starting their college careers, Deb is trying to let them go.

“I think it’s really sad,” said Sayge, “We’ve always worked a lot together. So it’s sad that we can’t be together all the time like we used to.”

Sayge started working with her mom at age 15. It’s work that she doesn’t mind, in fact she said it can be meditative.

“It’s nice to get out of the house and work hard sometimes,” she said.

While Bixler interiors will never truly end as her children have vowed to help whenever they can, it must begin its descent. But that’s okay with Deb Bixler.

“No matter where you’re at money-wise, you can choose to be good and happy with it or you can be miserable. I choose to be happy wherever I’m at.”

After a full day of school for her two youngest children and a hard day’s work for the oldest, Deb has finished the night’s dinner. With proper seasoning and another contagious laugh from Deb Bixler, the family sat down and enjoyed a meal together. There is no “switch” for Deb Bixler. She is always a mother. It doesn’t turn off when she’s working. It doesn’t turn off when she’s had a hard day.

“I enjoy being a mother,” Bixler said, with a confident smile.