Collective bargaining is a process for teacher unions that dates back to 1973. The process is a familiar one for NACS and NACEA, although this was the first time NACS hosted a public hearing in regard to the tentative collective bargaining agreement, which took place before the board’s meeting on Oct. 14.

The process to reach an agreement begins with an analysis of state funding for the fiscal year, and then salary changes for teachers are dictated respectively. According to Lizette Downey, NACS Chief Communications Officer, this was a relatively smooth year for this process, regardless of the newly implemented public hearing.

Throughout the entire process, the school board and NACEA representatives work closely.

“We really do work together during this process. It’s in our best interest to consider the teachers in this process so that we can compete for talent and so our kids have the best quality teachers we can find,” NACS Superintendent Chris Himsel said.

The three major components of the negotiation are insurance benefits, retirement, and salaries and stipends. One of the newer focuses of this year’s agreement is on continued education for teachers.

“We have been focusing on changing the contract over the years to give an incentive for professional growth and reward teachers for their commitment to the district,” said Jim Walker, one of the teacher union’s chief negotiators.

Among the salary increases for NACS employees is an addition of $245 for continuing professional learning. Teachers with more than 5 years of experience will also be eligible for $273 in stipends.

Himsel said that this stresses NACS’s desire to employ only the most experienced and expert staff, to provide its students with the highest quality of education.

Coincidingly, teachers are now offered a stipend of $800 for earning a National Board Certification. According to Himsel, very few NACS teachers are currently Board certified, so this incentive has been put in place to encourage more teachers to work towards one.

Additional potential stipends are available for performance based on teacher’s annual reviews. Reviews with indication of “ineffective” or “needs improvement” are not eligible for raises, while those receiving “effective” or “highly effective” can earn up to $1,007 of additions to their salary.

NACS teachers are also seeing a raise in their pay checks by $842 because the general assembly recently reduced the amount school districts are required to pay into teachers’ state retirement funds.

Five NACS employees were contacted to comment on the raises, and none wanted to discuss the topic.

With all of these changes implemented in this year’s NACS and NACEA tentative collective bargaining agreement, teachers are experiencing a $1,849 minimum increase in their base salary. Those already at the maximum base salary will receive these increases as stipends.

NACEA President Steve Driver shared that these changes are in an effort to both reward and retain the best teachers.

“Essentially these changes make us a better school system and help our students because of how it rewards our teachers to work to their fullest,” Driver said.

The Purdue University Fort Wayne Department of Theatre started their 2019-2020 season “off on the wrong foot” when an actor broke his foot three weeks into rehearsal for their production of “Flora, the Red Menace.” The otherwise seamless show starred Brittney Bressler and Joshua Smith, running for two weekends, beginning Sept. 27 and closing on Oct. 5.

“Flora, the Red Menace” tells the story of a spunky fashion designer, Flora Meszaros, and her journey to finding a job and love during the Great Depression. Along the way, Flora falls for Harry Toukarian, an awkward artist and member of the Communist Party. Flora finds herself torn between her career and relationship after joining the communist movement for Harry.

PFWs performance was directed by Craig Humphrey, associate professor of costume design and director of design and technology. Humphrey first discovered the show while working toward his undergraduate degree at University of Massachusetts, where he frequently checked out the albums of theatrical shows he did not know.

Humphrey shared that the original production focused on showcasing the talents of a young, Liza Minnelli, who went on to earn a Tony Award for best performance by a leading actress in a musical. Despite her talent, critics claimed the show was complicated and confusing, and it closed this rendition.

“So for years Flora existed in my head as ‘that Liza show with some great songs,’ but then in the mid- ‘90s I stumbled upon a new recording of the show,” Humphrey said.

Once Humphrey was aware of the available rights to perform the newer adaptation of the show, he was eager to put on a production with PFW students.

The process to put on the department’s performance of “Flora, the Red Menace” began with auditions at the end of April. Students were cast and equipped with their scripts before beginning their summer break. Then, the week before classes, they began the six-week rehearsal process.

However, the ensemble of 10 actors experienced a unique spin to their show when Chase Lomont broke his foot riding a longboard on campus. 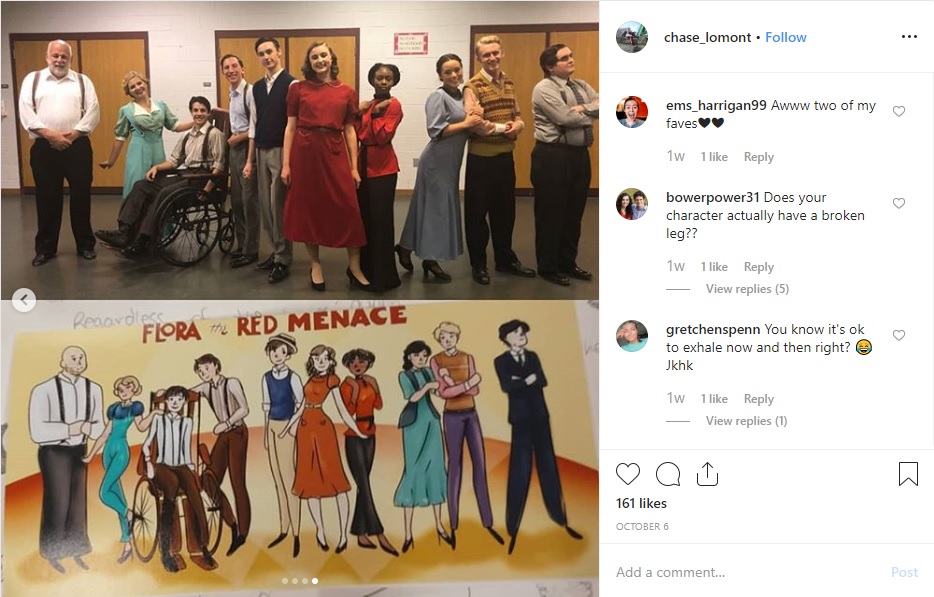 This injury became an obstacle to overcome, since Lomont played the character Kenny, the show’s only male role that required the actor to dance on stage. With Lomont now bound to crutches, Humphrey had a tough decision to make.

The cast took a night off of rehearsal and came back the next day to the news that another actor would be added to the show. Humphrey made the decision to have two people fill the role of Kenny on stage so that the non-injured actor could execute the dance numbers.

Bressler, a senior theatre major who played the role of Flora, said that at first it was an interesting dynamic to work with both men playing the same role. She said that once she got used to acknowledging both of them on stage, she didn’t even notice that it was strange.

“When we actually started doing it, it felt really natural for some reason, the way Craig had them go back and forth with their lines and kind of say things together,” Bressler said.

Although it may have eventually felt natural for the actors, some of the audience was uncertain about this alternative casting decision.

Sophomore theatre major, Anthony D’Virgilio, attended the performance to support his peers and stated that he felt this dynamic of the show was “funky.”

“In all honesty I think they should’ve just had one actor because it didn’t make sense the way it was with the jokes that they had with his character,” D’Virgilio said.

Humphrey made the choice to cast freshman theatre major, Tyler Birely, to also play the role of Kenny after Birely auditioned on Sept. 8 for PFW’s upcoming production of “Ghetto,” just 20 days prior to the opening night of “Flora.”

Birely said that it was nice to get recognized as an incoming freshman.

“Going into college you’re afraid of making good first impressions, and they had enough faith in me that I could do it joining halfway through the rehearsal process,” Birely said.

In the end, Humphrey shared that he does not regret this decision and thinks this casting worked out for the best.

Birely, including five of his other castmates from “Flora, the Red Menace,” can be seen in “Ghetto” at PFW’s Williams Theatre the weekends of Nov. 15 and 21.